There’s a family of foxes in our neighbourhood. I suspect they live next-door, where the garden is more of a junk-yard (or as he’s an artist, he’d probably say ‘store of useful objects’). Foxes have been regular visitors to our garden but their activity has really stepped up this year, possibly because there are cubs. I posted a photo of one of the cubs on Facebook and provoked a range of comments, for and against foxes.

I like seeing the foxes in the garden. I see little enough wildlife in my urban existence, so it’s a treat when there’s a fox sniffing around or some cubs playing.

However… It’s not a treat to have to keep picking up the dog-food wrappers they leave behind, presumably brought through from a neighbour’s badly-secured bin. It’s also not a treat to have to keep filling in the holes they dig around the roots of shrubs. Worse still is the way they dig up my pots. I had planted clover and phacelia in this old sink, with a few dwarf sunflowers, giving it a fallow year – a break from tomatoes. The foxes keep digging it up, scattering the plants and the compost. I (and the plants) can’t keep up with them, so it’s just a mess. 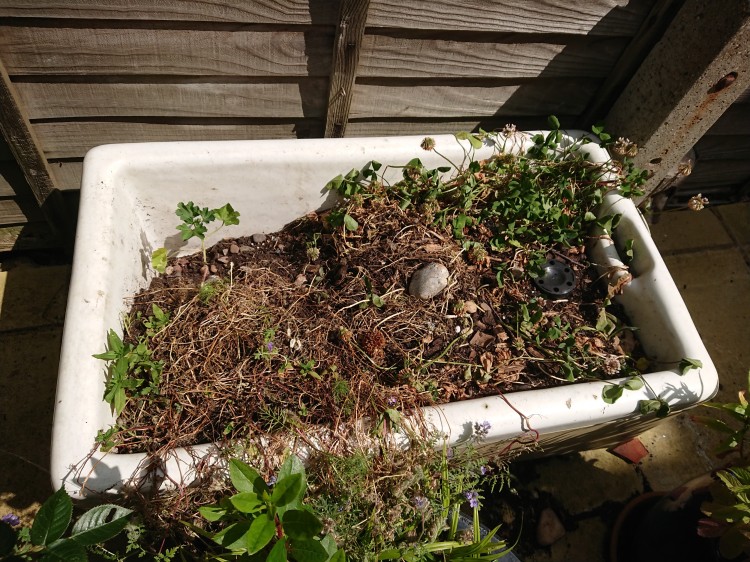 I keep the back end of the garden wild for wildlife. The grass grows long. The weeds go unweeded. The leaves are left. There’s hawthorn and hazel, rowan and laurel. There are a couple of log piles. The foxes would be welcome to dig there, but not in my pots on the patio. One of the Facebook comments said, How is a fox supposed to know not to dig there? Fair enough. But is it wrong to feel that it’s OK for me to exert some control over my garden? 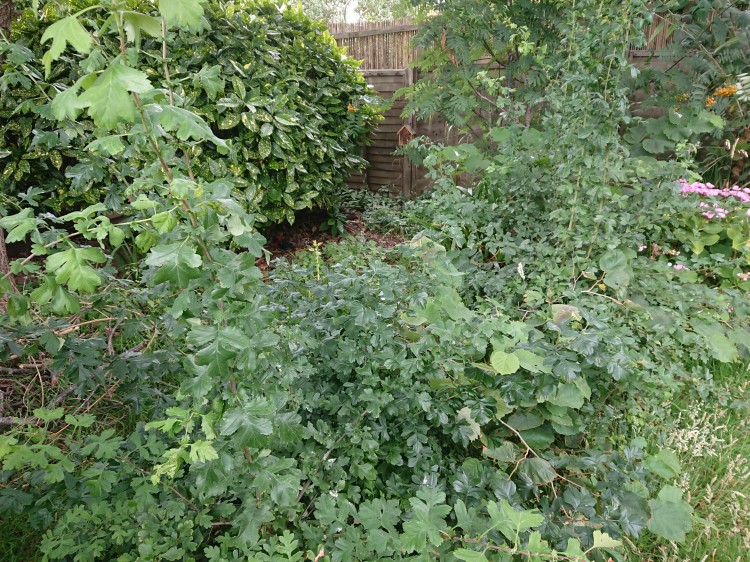 I think I know where the foxes were getting in: through a damaged fence panel behind the shed. I’ve blocked off the holes (leaving a little hole for hedgehogs – don’t worry) and added some chicken wire above the fence too. It’s too early to tell if it’s worked or not. I suspect nothing will keep them out, but in making access less easy I may restore some balance to the situation. 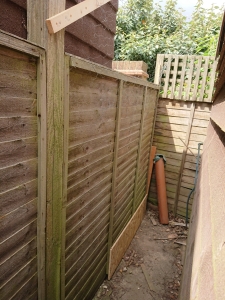 It’s balance that I’m concerned about. I’m happy for the foxes to come in and do a bit of digging for worms, and I can deal with the occasional food wrapper and the occasional lump of scat. But it was overwhelming. In the same way, I’ve taken measures to keep the squirrels off the bird feeder: I like seeing squirrels in the garden, but they were eating all the bird food and I want to support the birds.

I’m working on a very small scale here in a small garden. I feel that if I didn’t take steps to impose some control over the garden eco-system, it would soon get out of balance. Perhaps on a bigger scale, I could be more laid back and nature would find its own balance. I worry that my decisions about control are just based on my wish to have a nice garden. Even though, for me, a nice garden means a wildlife-friendly garden, I also want it to provide some food for me and my family and a pleasant environment for relaxation. I’m sure I’m making mistakes, because I know I don’t have the full picture of the complexity of the garden eco-system in my mind. But I want to do the right thing for the plants and animals of the garden, including the human animals.

There’s an obvious parallel with the way that human activity has become way out of balance with the rest of nature, overwhelming the global eco-system in so many ways. What we should have been doing, biblically-speaking at least, was caring for the earth in such a way that balance was maintained for the benefit of every creature – using our power for the common good. Perhaps the least I can do is become better informed about the wildlife in the garden and pay better attention to it – attention that is less judgemental, less self-centred and more loving, more humble, and more servant-hearted. The parallel coming back at me feels just as obvious.

3 thoughts on “Out-fox the fox”