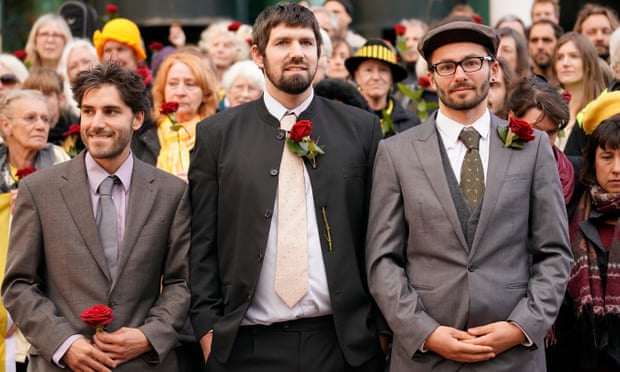 Yesterday these three men were jailed for protesting against fracking in Lancashire. They had climbed onto trucks carrying drilling equipment and so prevented them from moving. The men were charged with causing a public nuisance. Simon Roscoe Blevins and Richard Roberts were jailed for 16 months, Richard Loizou for 15, and a fourth man, Julian Brock, was given a 12-month suspended sentence. In sentencing them, the judge said that he believed they were not rehabilitated inasmuch as they remained convinced of the rightness of their cause and that only a custodial sentence could punish them.

Lancashire County Council had refused planning permission for fracking at this site, but the UK government over-ruled the local authority. There is talk of making fracking exempt from planning permission, but the Lancashire case shows that local democracy counts for little anyway. So not only is the democratic channel of protest demolished, but in applying anti-terrorism and other laws to what in the past would have been regarded as peaceful, non-violent direct action and imprisoning those who protest, the government has illegitimated all opposition.

What will never happen is the oil and gas companies, or their political friends, being charged under public nuisance laws for the nuisance their drilling activities will cause to local people, which is likely to be far greater than a country road being closed for a couple of days. Neither will they ever be imprisoned for the criminal damage that burning their products causes to people, animals and plants all over the world, with the poorest and most vulnerable being the first and worst affected.

Biblically, rulers have a duty to protect the poorest and most vulnerable. Psalm 72, praying for the king, says, “May he defend the cause of the poor of the people, give deliverance to the needy, and crush the oppressor.” (Psalm 72.4). When governments defend the cause of big business and crush the poor, they act contrary to the will of God. When governments put money-making before caring for the vulnerable, and at great cost to the vulnerable, they act contrary to the will of God. Jesus said, “You cannot serve God and money.” (Matthew 6.24).

But… When governments choose money over God, are they simply reflecting a democratic mandate in the sense that choosing money over God is a daily choice many of us make? Jesus also said, “The rulers of the nations lord it over them and their great ones are tyrants over them. It will not be so among you…” (Matthew 20.25-26). If I want to say that my government, in delegitimising opposition and promoting economic growth through developing a domestic oil and gas industry whose products we should not use if we want to check climate change and keep the earth habitable for humans and many other species – if I want to say that they are not acting in my name, I need to make sure that I am choosing God over money, choosing servanthood over power, and doing what I can to defend the cause of the poor against the oppressor. I have much to learn, and there’s no time to lose.