I visited Rock Farm today. It’s a 6-acre market garden in West Sussex that’s been run as a community project called Roots To Growth, focusing on the therapeutic effects of growing things and working outdoors. It’s recently been taken on by OneChurch, Brighton.

Ben, who’s leading the project, showed me around. He’s keen to use permaculture principles to reduce the amount of physical workload (“There’s no point coming for something therapeutic and getting stressed by the amount there is to do”) but also to work in harmony with the plants, the people and the land. He’s also keen for this to be a place where people just enjoy being in the countryside.

This particular bed has been used for beans and courgettes this year, and has an apple tree at one edge. I loved the way Ben talked about putting in plants “that want to be near that tree,” meaning things like comfrey and dandelions that will attract good pollinators for the tree. The idea is to listen to the land and put plants together that not just work together but that like being together. Another principle is to listen to the people who are involved and, rather than presenting them with a long list of jobs, let them do the things around the farm that they find life-giving. It’s a model of land, plants, animals and people flourishing together. I guess that, in the big picture, the jobs that really need doing will be the jobs that, between them, the people want to do, and the work will get done. The farm might even be more productive – and certainly will be in the big picture. 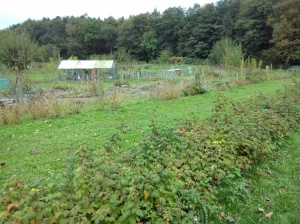 I’ve been attracted to permaculture for several years and have tried a few practices in my garden. I love this idea of listening to the land, learning from it and working with it. Layer mulching has worked pretty well for me (layers of cardboard, compost and manure), and not disturbing the soil structure by digging works very well for me. I’ve loads to learn, though – e.g. about how different plants work together – but I think it’s a great idea.

It was inspiring to hear Ben’s vision for Rock Farm as a place where the point is not to grow as much stuff as possible, but to let people, plants, animals and the land itself flourish.