I say I hate meetings, but I seem to spend a lot of time at them and prioritise them in my diary. I suspect that’s because I secretly like them. There’s something about being on a committee that makes me feel important. I like being with people, too, especially if they’re my friend or if they’re important, or both. Some decisions are important and have an impact, especially if someone acts on them. My confession is that, more often than should be, that someone is not me.

I think I need to balance the talking with more action. That’s not to say I don’t do anything already. In fact, Mrs Mabbsonsea and I think hard about how we live and have taken quite a lot of steps over the years to live less destructively and more creatively.  But I am becoming conscious of how often I make excuses (probably there’s a meeting I have to go to) and how little I dirty my hands.  And I want to change.

Last Friday I went on my first student demo. I’m 50 years old and have never been on a student demo. It was part of the global day of action for fossil-fuel divestment. I was tempted to say, it’s my first day off in 2 weeks, I’m tired, I’ve got lots of little jobs to do in the house, blah blah. But I want to change and become a man of action – a man with dirty hands – and so I went t 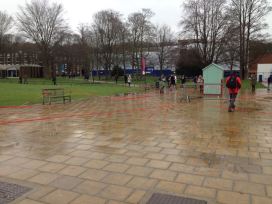 o Sussex University and helped make a web of red ribbons across the square for the red lines (like 1.5C temperature rise) we mustn’t cross but that we will cross if we keep giving financial support to the fossil-fuel industry, and I joined in with the chanting and talked to some people about what was going on and then helped take it all down again and went home.

OK – it wasn’t much of an action and while it was the first student demo I’d been on, it certainly wasn’t the first demo of any kind, not by a long way. But what changed was that I ignored some perfectly legitimate excuses and went. I have another idea for this Friday, and the excuses are limbering up. I was wondering last week what I would do for Lent this year, and perhaps this is it – a kind of anti-Lent – to counter the excuses that tempt me to do nothing with the self-disciplined choice to act.