Today I went to the funeral of a minister who had been a great support to me early in my ordained ministry.  It was a good, faith-filled celebration of the life of a remarkable man, for whom I’m very thankful.  He had been a frequent visiting preacher at my church in Battersea, which I left in 2006, and there were quite a few people present from that church.  I haven’t seen them for years and it was great meeting up with these old friends (none of whom looked any older, I’m annoyed to say) whilst we gathered to say goodbye to an old friend.

The service was in the village where I grew up.   I caught an earlier train than I needed, so that I could have a nostalgic hour wandering around.  Ewell is an odd place.  Most of it is 1930s housing estates, but the village itself is very historic, being a stopping place on the Romans’ Stane Street.  There are good examples of timber-clad Surrey houses, two former gunpowder mills and this old “Watch House”: 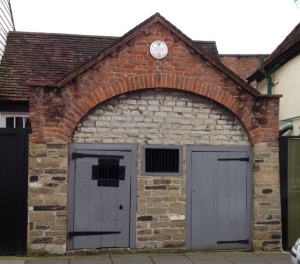 As a small boy I liked to be lifted up to look in through the spooky bars into the prison cell.  I did a project on it for a Cub Scout badge.  The door on the right accessed the hand-pumped fire engine.  That is now in the museum, housed in this highly unusual 1960s building, Bourne Hall: 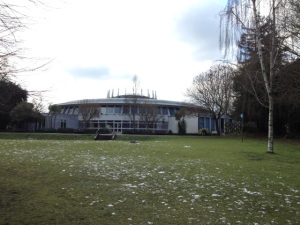 We used to go to the library there, and often visit the local history museum upstairs too.  I was pleased to see that the fire engine and Lord Roseberry’s Hansom Cab and some other familiar objects are still there. I enjoyed my afternoon reviving memories …

… and then coming home.

I’ve been surprised how quickly I’ve felt at home in our new house.  If I think about home, home is this house.  Home is not where I grew up, it’s not where my parents live, it’s not anywhere else I’ve lived.  It’s here, where the fridge is.

Here’s a link to a clip of The Boxcars playing their song, “I went back to my old home today” in a back-stage toilet in Tennessee.   (There’s a risk of getting in a muddle, because for me today was more about places and friends, not, as in the song, my parents, even though they’re a big feature in my childhood memories.  I’m glad to say they’re alive and well & it wasn’t time so much as a removal truck that took them away from Ewell.  Anyway, the song still feels appropriate)