You know Dasher & Dancer, Prancer and Vixen, Comet and Cupid, Donner and Blitzen. But do you recall Robert the Reindeer?  No?  Well there’s a very good reason for that. . .

Robert looked up from the snowy moss and he couldn’t see a thing except for snow.  He thought he had better find the rest of the herd.  He walked through the snow storm to where the other reindeer had been grazing, but he didn’t find them.  Robert kept walking and walking, hoping to find his friends, but they were nowhere to be seen.

As Robert walked, the snow turned to rain and then the rain turned to sunshine. Robert kept walking. It got hotter and hotter.

One day he came across a man and a woman sitting by the roadside. There was a donkey standing near them, with her head hanging down. In fact, they all looked very fed up.

“I’ve sprained my ankle on a big stone,” said the donkey. “And now it’s too painful to walk.”

“You need to rest that ankle,” said Robert.

“I know,” said the donkey, “but these people are on a journey. The woman is going to have a baby soon, and she needs to get to where they’re going as quickly as possible.”

“Well, I’m trying to find my friends,” said Robert. “But I don’t mind taking these poor people where they need to go. Then I can carry on with my search.”

Well, if a donkey can talk to a reindeer, it’s not so hard to believe that the man and the woman quickly figured out that this strange creature was offering them a lift. The man helped the woman to climb on Robert’s back, and then he led the way.

The next evening, they arrived at a little village.  The man knocked on the door of several houses, but the people didn’t seem very friendly. In the end they found a stable and the woman gave birth there on a pile of hay.

Robert heard some beautiful singing and he looked out of the doorway. There in the sky was the most beautiful star, and it seemed to be singing to Robert. He felt that he had to walk in the direction of the star, so he set off.

Robert walked and walked. He rested in the daytime, so that he could follow the star at night.  As he walked, it got colder and colder.

Back in Bethlehem, no one knew what a reindeer was. So when people told the story about Jesus being born in a stable, they cut out the bit about the reindeer and pretended that the donkey had taken Mary all the way.  They thought it wasn’t a very important detail, because that’s the way many people think about animals, and Robert the reindeer was soon forgotten.

So now you know why you haven’t heard of Robert the reindeer.  You also know now why reindeer are so proud of the fantastic crown of antlers that they wear on their heads. 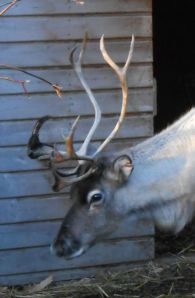