Today, Mrs Mabbsonsea and I said a scornful ‘Hah!’ to what passes for snow and ice in this part of the world and headed up country.  I dropped her off at a quilt show, then went next door to Wakehurst Place, which is Kew Gardens in the countryside.  It’s a beautiful place at any time, but it was especially beautiful today.   I had a lovely time wandering through the quiet woods (not many people about) and enjoying the solitude.

These dogwoods were glorious: 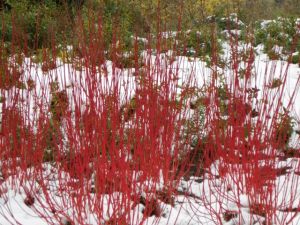 There were some sculptures made from woven willow: 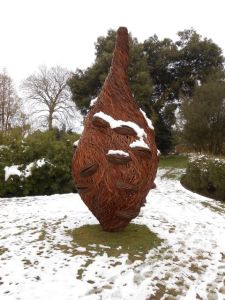 I liked this iron beetle guarding a pond:

And I was pleased to have captured this rabbit in a reasonable photo:

Except that I didn’t capture it at all.  In real life, it ran away, and I’ve no idea what it’s doing right now.

For years, I didn’t use a camera.  It started when Mrs Mabbsonsea borrowed my little Olympus Trip and, as her need for it always seemed greater than mine, I never re-acquired it.  Then she bought herself a digital camera, but I was out of the habit; plus she now took so many photos that I didn’t feel that I needed to add to the collection.  I also had begun to feel that there was something about not capturing a moment, but letting it be and letting it go.  A photo captures the moment and then you store it like a possession.   It seems commonplace for people to say that the thing they would most want to save from floods or fire (other than family and pets, of course) is their photo albums.   Isn’t it better to enjoy the present moment for what it is and move along, rather than try to bottle it up for ever?

I’m enjoying having a camera again.  I’m enjoying being able to share my experiences with others (like you) through the photos I bring back.  Maybe the ephemeral nature of computerised media will mean that I won’t be able to keep them forever anyway.  (Remember VHS?  78 rpm records?).  So maybe I don’t have to feel that I’m compromising my wish to live in the present tense more fully by taking photos of it.   Maybe.

Mrs Mabbsonsea has broken her camera and wanted to borrow mine to take pictures of quilts.   But I remembered it’s a slippery slope, lending her cameras.   I hope you think I made the right decision – hey, we got a rabbit in the snow.

[The willow sculptures were woven by Tom Hare. I’m afraid I didn’t note down who made the beetle.  The rabbit was made by Mr and Mrs Rabbit.]